Where Even Eagles Do not Dare

(A Tribute to the Valiant Thambis)

Siachen, the highest battle field in the world, is news once again because of 10 army men who were buried under the snow on 03 Feb 2016.

“Quartered in Snow, Silent to Remain, When the Bugle Calls, They Shall Rise and March Again” is engraved on the scroll of honour at the Siachen Base Camp.

Ten soldiers of the Madras Regiment, oldest infantry regiment of the Indian Army, have been buried under an avalanche at minus 50 degree Celsius in the Northern Glacier defending their motherland far away from their homes in South India. Unfortunately, the entire section post of 10 brave soldiers affectionately called “Thambis” under the command of Subedar Nagesh was buried under snow due to collapse of a snow wall. The entire nation has saluted these brave martyrs.

It is not easy to serve in Siachen Glacier. One has not to be only in peak of physical fitness but also possess the nerves of steel to survive there. It is very difficult for a common man to perceive the way our men fight and live at Siachen Glacier unless one has stayed at heights beyond 15000 feet in the winter months. Availability of oxygen to breathe is just one of the numerous problems a soldier faces for his survival. The biggest enemy Indian Army is battling today at Siachen is the weather.

The strategic importance of the Saltoro Ridge and the Siachen Glacier is what has forced the Indian Army to occupy these windy heights ranging between 17000 to 21000 feet. Incidentally, the highest post in Siachen, Bana Post, is named after a local hero Honorary Captain Bana Singh, Param Vir Chakra. It was the indomitable spirit and meticulous fighting skills at extreme high altitude of Bana Singh and his men of 8 JAK LI that we were able to throw the Pakistanis out from this post named “Qaid” and ensure that the Saltoro Ridge was under the occupation of Indian Army.  Then Naib Subedar Bana Singh was awarded Param Vir Chakra- nation’s highest gallantry award.  The post was renamed Bana Post in his honour. Today Indian Army controls all of the 76 km long Siachen Glacier and all of its tributary glaciers, as well as the Saltoro Ridge west of the Glacier along with all its three passes namely, Bilafond La, Sia La and Gyong La. Saltoro Ridge provides the tactical advantage of dominating height. While the Indian army has secured its positions on the ridgeline, the Pakistanis control the glacial valley southwest of Gyong La. The Pakistanis have been unable to get up to the crest line of Saltoro Ridge. India therefore cannot afford to abandon their strategic high posts. In order to hold on to its positions at those dizzy heights Indian Army has suffered more casualties due to vagaries of weather than the enemy action. But that is the price a professional army has to pay for the sake of National Security Interests. In 2012, Pakistan’s Gayari military base was also hit by an avalanche killing 129 soldiers and 11 civilians.  Neither casualties nor expenditure matter where the national security is involved. The high posts in Siachen allow the Indian Army to keep an eye on the activities of both Pakistan and China and prevent their linkup in case of a conflict.

Survival of the Fittest

In Siachen survival is the keyword. Chill blains, frost bites, loss of memory, loss of weight, sleep disorders; speech slurring, snow blindness, pulmonary oedema, cerebral oedema, crevasses and avalanches keep the soldiers on their toes. Imagine staying at a place with 10% oxygen supply, minus 50 to minus 60 degree Celsius temperature and heights above 5000 meters above mean sea level. Only a super hero can survive in these circumstances. All our soldiers posted in Siachen are super soldiers and super heroes who in defiance of all physical and mental limits stand guard 24×7 to secure those snowy heights for the sake of their countrymen so that they can sleep in peace. As per a local saying “The land is so barren and the passes so high that only the best of friends and fiercest of enemies come by.”  Snowstorms in Siachen can last up to three weeks at a stretch. Wind speed goes past 160 kilometres per hour in no time. When the snowstorm comes the soldiers have to keep clearing the snow simultaneously (using shovels in snow storm) lest their post gets buried under snow. Logistics in the Siachen is a nightmare. But the Indian Army has tried its best to make the life of the soldiers as comfortable as possible. An apple or an orange becomes harder than a cricket ball. Cadbury chocolate has to be melted before it can be eaten. Snow scooters, specialised clothing, air maintenance, special rations, satellite phones, fibre glass huts and specialised tents are few of the measures taken to keep the soldier fighting fit. Helicopters fly at unimaginable heights putting to test the skill and endurance of the pilot and machine. The highest helipad in the world is at Siachen. Kerosene pipelines and aerial ropeways are being planned to ease the problem of maintenance. Though SASE (Snow and Avalanche Study Establishment), a DRDO establishment, forecasts avalanche and adverse weather warnings, I wish they could be more reliable and accurate to prevent causalities.
“We do difficult as a routine. The impossible may take a little longer”, is the motto of each soldier of Indian Army serving in the Siachen.

A word about the Thambis. A Madras Regiment soldier is called a Thambi which in Tamil means brother. The soldiers of the Regiment hail from all the South Indian states including the island territories. It has a mixed class composition. The troops speak Tamil, Kannada, Telugu and Malayalam. English and Hindi are also spoken. Thambis are hardy and physically very tough. Unlike the popular belief, the Thambis love to serve in mountainous terrain. In fact, one has to see to believe Thambis rushing to take bath in cold mountainous streams followed by a liberal spray of talcum powder and face cream. Most of the battalions of the Regiment have served in the Siachen Glacier and excelled in performance there. I salute all the ten Thambis who sacrificed their lives in the recent incident. A plaque in the Brigade Headquarters at the Base Camp reads, “When you go home, tell them of us and say, for your tomorrow we gave our today.” Though borrowed from the Kohima War Cemetery, the quote is very apt for those who smilingly lay down their lives at the highest battle field of the world for the safety of their fellow countrymen.

(The author is an ex Madras Regiment officer based in Jammu. He is a political commentator, security and strategic analyst.) 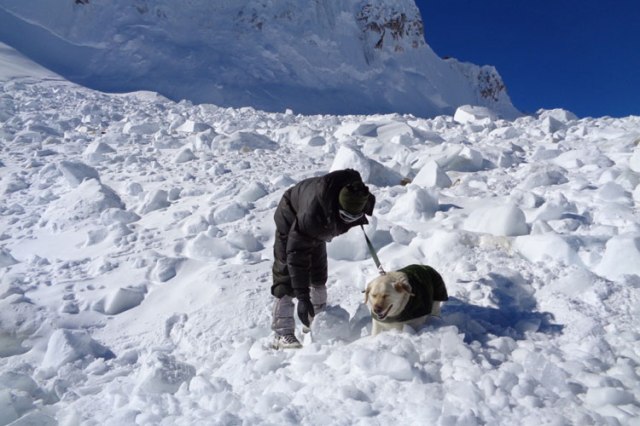 Rescue dog on job in Siachen 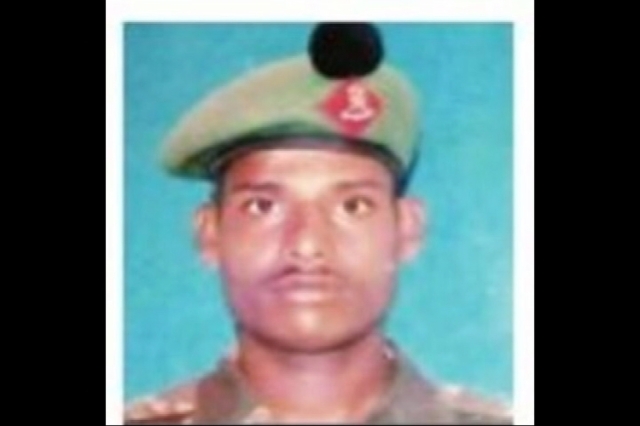 A veteran of the Indian Army.
View all posts by Shiv Rana →
This entry was posted in Brother -in Arms, My years in Olive Green popularly kmown as OG and tagged China, highest battle-field, minus 50 dgree, Pakistan, Satoro ridge, Siachen. Bookmark the permalink.

1 Response to Where Even Eagles Do not Dare

THOUGHTS OF A POET IN THE RAIN

ART - Aesthete and other fallacies